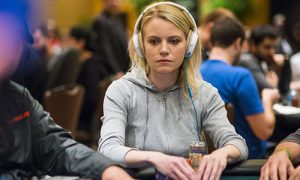 A bitter exchange ensued on twitter after poker pro Cate Hall accused Chad Power of extortion. More than a year ago, Hall said that she entered into a staking arrangement for cash games where power claimed that she lost $60,000 while playing mid-stakes cash games during the time. Hall on the other hand is not disputing the amount. Both of them are form Washington DC which is known to be a live poker scene in the country.

Hall claimed that under the deal they had, she would not be liable for any losses in the event. Under the deal that they had, Power was to get a cut of the winnings. After the event she took a break from playing poker. Power was motivated to post about this in social media to alert potential backers. And he did this to negate the fact that Hall was not liable for the losses. On the other hand, Hall claimed that she will never get into a deal where she is 100% responsible for any losses.

Power said that unless he was paid back in full, he would publicly drag Hall as a scammer. According to law, Hall says that this is extortion or something close to it if Power said this was not extortion.

It is common to find in the poker world about staking deals and that these deals come to an end after the stacked player loses their backer’s money. In her career, Hall has had more than $1 million in the tournament’s career and this includes being in the WPT final tables.

Hall said that their deal turned out not to be the best with Power and that she left the poker tables due to her personal issues. Hall claimed that she had got into spiritual and health crisis a year ago and this has been the reason she has not played poker since then. She went ahead to defend herself by saying that she did not make a choice of getting into mental health problems. Since she had the problems, she chose to live on savings and not someone else’s money to play with.

Power finally said in a forum that he did not have enough evidence to show that they were in an agreement with Hall that she would pay the money she lost. He wanted to put this out to assist other backers who might want to back Hall in the future.

Power claims to be backing more than 40 poker players and said that he gets into deals where his horses will be able to absolve their makeup if he dropped them. As for Hall, he said that she played as big as $25-$50 no limit hold’em while they were on a backing arrangement. He continued to say that she used drugs and that she was not able to beat $1-$3 no limit hold’em. Power says that Hall lost more than half of the $60,000 in just two mid-stakes cash game sessions early in the year.

After they agreed to have an arbitrator to handle their case, the arbitrator claimed that there was no proof backing the deal they had. This is such a cumbersome case and it would be great if you played your poker in bitcoin poker and casinos to avoid such cases. Learn how to play poker by yourself and you will not be having such backer problems of other players losing your money.


This entry was posted
on Tuesday, September 18th, 2018 at 4:36 pm and is filed under Poker News.
You can follow any responses to this entry through the RSS 2.0 feed.